The Red Chip Poker forums are great. I wanted to give an extended answer to this question:

3:30 am and the full (10) table is very active. Tilted play caroms around from one to another player.

How does he expect to profit from his call PF? Even if he had a 100% tell on me he can’t turn a profit here, can he?

Let’s say my hand is face up after his PF call and I push blind. I still think this is -EV for him. He could fold all Ax and Kx flops but he’s calling everything else.

The actual analysis is beyond me but it’s not that important because my hand isn’t FACE UP. It’s a range no matter what he thinks about my short stack game. AQ+, 77-JJ is likely (yes, I might limp with JJ)

I do not want to get into the strategy of this line. I will let the folks over on the forums do that. What I do want to do is look at the specific math question (in bold) with Flopzilla. The question is a little off since an omniscient Villain that knew our cards should only call when he makes a pair and it is ahead. When does that happen? 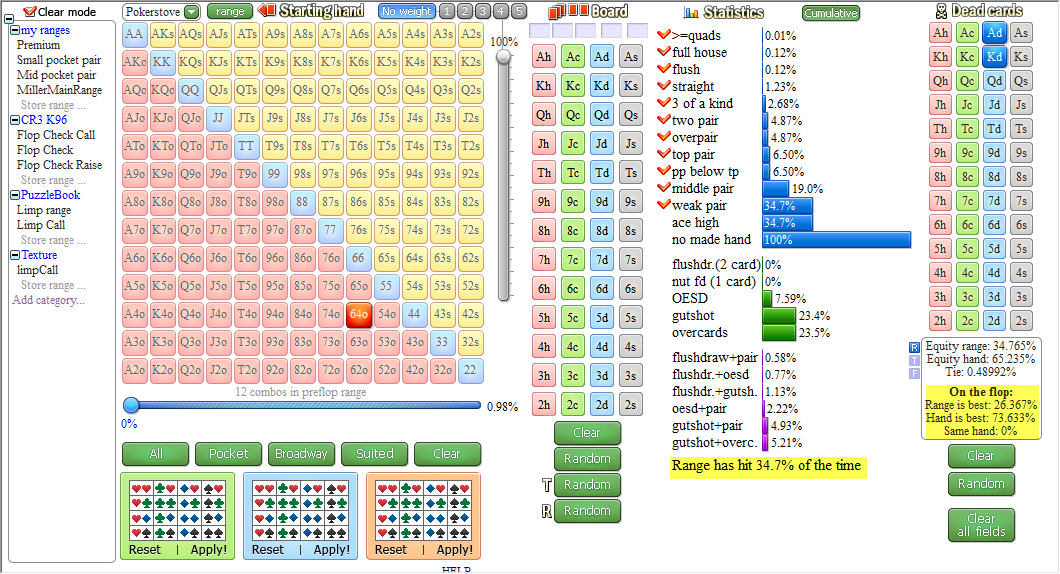 We have put the Villain’s range in as 64o and our hand in as AdKd. The important result is in the lower right: Villain is best 26.367% of the time on the flop. There is a second number worthy of note: Villain hits a pair or better 34.7% of the time. This means there are times in that 34.7% of the time where Villain hits a pair and is still behind. We are assuming we lay our cards out after we bet, so Villain can do the perfect thing. The pot going to the flop was $250 and there is $150 left.

When he is ahead on the flop, lets assume he calls.

He could have two pair, he could have a straight, but overwhelmingly he will have a single pair and we will have six out with two cards to come. We can not easily say what our equity is when called. Let’s find a lower and upper limit.

What happens from Villain’s perspective on the flop?

An omniscient Villain can claim his equity very well on the flop and does find the flop call profitable. The question though is how did he get to this spot?

Villain spent $90 on a ticket to the flop where he will on average recover $65 with perfect omniscience. This was a losing move pre-flop, but he recovers a bit on the flop.

We have forgotten one really important thing here, Villain is not omniscient. Remember he hits a pair or better on the flop 35% of the time, but is only ahead 25% of the time? This 10% gap where the omniscient player folds a pair is called reverse implied odds for everyone else. If Villain were to call there, he would usually have five outs twice or 20% equity in a $550 pot, or $110 for an average loss of $40 on his $150 call. This loss happens when he can not fold a ratty pair on a flop with an Ace or a King. This loss happen about 10% of flops, so that is about $4 he loses on average. This knocks his $65 win on the flop down to about $60.

Villain’s pre-flop call of $90 is costing him about $30 each time he makes it. Do not focus on cases like this where he recovers his equity. Instead think of the wildly more numerous situations where he calls pre-flop and you quickly pick up $90.

Doug Hull
Doug wrote the popular Poker Plays You Can Use Vol 1 & 2. He left his 9-5 to pursue full-time poker. Learn more about Doug here
Comments